When I was a little girl, LEGO®s and Crystal Climbers® were favorites among my toys.  I
lived a lot of my childhood wrapped up in imaginary worlds, creating magical scenarios like in The Lion, the Witch and the Wardrobe, where all I had to do was climb through a fork in the crab-apple tree in the backyard to be able to enter into an alternate reality.

We did not have a lot of money, so while my friend, Reika, who lived down the street had the coveted Barbie Dream House, I had an old wooden one-story doll house that my grandpa had made for my mom when she was a kid.  But, armed with imagination, you can build a lot with Chrystal Climbers® or LEGOs® —high-rise buildings able to escape the stratosphere, or just teacups with saucers.

And my grandma, who taught me how to crochet and sew, made most of my doll clothes until I was old enough to make them myself.  I still vividly remember a sparkly aqua

dress, reminiscent of a 70s evening gown, that she painstakingly sewed for my Barbie.  One of the last conversations I had with her before she died, many years later, was to tell her that, while the Barbie Dolls were long

gone, I still owned and treasured those dresses and outfits she had made.  My two step-daughters had played with them, and even though my old Barbie dolls had received haircuts (or been be-headed!), these precious clothes, an essence of another era, still survived, although the sparkly aqua evening gown had now been transformed into a strapless-dress

Recently, my husband and I took our four-year old grandson, Elliot, to LEGOLAND®.  In the center of the park, surrounded by dragon roller coasters and fire trucks and other 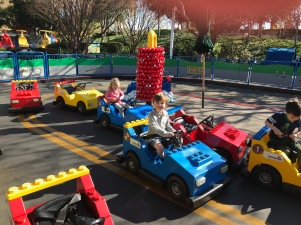 attractions that you would think would lure all children of that age to play, is a room filled with LEGO®s of every shape, size and color.  And, even though the kids could pull out their LEGO®s at home and build the same things, this room is one of the most popular spots in the park.  The children are invited to build LEGO® cars and race them down a ramp, and to build LEGO® skyscrapers atop an “earthquake plate.”

Because the kids are experimenting with adding weight to the front or back of the car in order to make it go faster, or because they want to add a dragon sail or a whale tail to

their vehicle, a large proportion of the cars don’t actually make it all the way down the ramp before breaking into pieces.  But the kids don’t mind.  They pick the pieces up and redesign their car.  And the sky-scrapers being built next door, complete with viewing decks and flag poles, eventually all succumb to the forces of the “earthquake plate” upon which they are built.  But, the kids aren’t too worried about it.

When I was a kid, the fanciest LEGO® kit you could buy, was a red plastic-divided box with three colors of LEGO®s and a yellow lid that doubled as a building platform.  But, by the time my step-daughters were playing with LEGO®s, all sorts of fancy kits had been created.  These kits were good and bad—good because it taught them to build something from start to finish, and bad because once the “creation” had been achieved, there was a reluctance to break it all apart and start over again.

I think LEGO® realizes this issue though.  In one of the recent LEGO® movies, the villain is a superglue cap because, in reality, the dad is creating an entire LEGO® world in his basement, and he wants that world frozen in place.  It takes his kids’ anguish over this still-life existence to make him realize that change is the nature of things.

Perhaps we all need to learn a lesson from the kids once in a while, and let our imaginations soar to new horizons.  We need to let go of our stranglehold on what we perceive to be “reality” and our attachment to it, and, instead, allow our minds and our hearts to visit a place where a car with a dragon sail can fly to the bottom of the ramp ahead of all the other LEGO® cars.  Or, perhaps, we can see the value and beauty in going to a place where that car smashes into pieces, and we pick it up and start all over again with bright eyes and a vision for the future.

One thought on “A LEGO® Lesson on Impermanence”

Follow Bliss Blog…the Musings of a Yogi on WordPress.com